This story was originally published September 27, 2015.

The Rodriguez family hadn’t even finished unpacking their apartment on Barnes Street in Middletown less than a week after they moved in.

On a hot Saturday afternoon, the family’s youngest child Danna didn’t want to take a nap and started to cry. Big sister Pricilla, 13, took Danna for a stroll outside in her little blue push car. But when they stepped outside, Pricilla knew something was very wrong. The sky was dark with what at first looked like rain clouds, but she quickly realized it was something much worse. END_OF_DOCUMENT_TOKEN_TO_BE_REPLACED 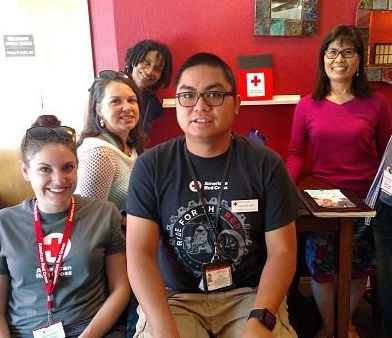 Starting 40 odd years ago, 300 like-minded members of the Adidam Spiritual Community moved to Lake County to be near the Mountain of Attention Sanctuary, one of the worldwide group’s meditation centers. Varied as their backgrounds were, members of the community shared a common vision of caring for their sacred grounds. END_OF_DOCUMENT_TOKEN_TO_BE_REPLACED

It was an ordinary trip from Honolulu to our Napa Valley home located on Howell Mountain above a small town named Angwin on Saturday, September 19th. Little did my husband and I know that one of the most destructive wildfires in the area was about to take hold on the other side of the mountain.

I remember looking out my window at the vineyards surrounding our house and noticing the wind had picked up. I got an ominous feeling in the pit of my stomach. By the next morning, my sister-in-law, who lived in Calistoga, called to inform me that many people she knew living in Middletown had lost their homes and beloved pets. Eventually, the number grew to 1,000 homes and over 100 square miles burned.

I hastily made my way to the Red Cross shelter located at the Calistoga fairgrounds to offer my assistance. I was introduced to Pat Morales, a Red Cross Volunteer from the Greater Northern California Chapter, who was amazed I was a Red Cross volunteer from Oahu. He quickly set me up with a Red Cross vest, hat, and t-shirt and put me to work.

As I made my way into the cafeteria, I saw people sitting at tables, some eating, some not, others staring into space, or their heads hung low. One woman was busy nursing her young infant, and children were occupied in a corner with coloring books and related activities. “Gosh”, I thought, “Where do I start?”

I saw people covered in soot, a look of shock, despair, and hopelessness etched upon their faces. Others sat on cots outside with their pets, mostly dogs. Larger animals such as horses and llamas were in a nearby field. Calistoga residents made sure all animals were provided water and food.

I spoke with several people who told horror stories of barely making it out alive with what little belongings or pets they could. Many people only had the clothing on their backs. One man mentioned that he could not start his car because he realized that he was holding his house keys then turned around to see his house burning. He walked out of the area and eventually made it to the shelter. A woman came into the shelter crying and stated, “What do I do now? Everything’s gone!” The Red Cross offered shelter, food, and emotional support.

Other people in the shelter told stories of getting in their vehicles with family members and speeding through fireballs. Many houses were completely destroyed and turned to piles of ash or unrecognizable debris. One woman came up to me at the shelter to tearfully announce that she learned her house was still standing, at least for now. I gave her a big hug.

The residents of Calistoga responded with an outpour of donations which included food, pet food, clothing, and most of all much needed support. Residents from as far away as Marin County responded with various donations including rooms for people and their pets. A notification board was set-up to inform about other resources available.

I realized that that this was my very first large scale community disaster as a Red Cross volunteer. Kudos goes out to the many area fire fighters who are still fighting the blaze. We were lucky that our house was unaffected. Although I was definitely not anticipating this terrible event, I took away from it that even with all the global problems taking place around us, human caring and compassion still rules.

I am very proud to be a Red Cross volunteer.

Saved by the Church Bell

Many folks in the Middletown area know that the United Methodist Church in Middletown was the site of the Red Cross Client Assistance Center for several days. People affected by the Valley fire could go there to find help and resources available from the Red Cross. (It has since moved to the Twin Pine Casino.)

What many don’t know, is that the church has long been a sanctuary for evacuees of any disaster. In fact, in the midst of the Valley fire erupting, the Middletown UMC church bell was used to signal the alarm for townspeople to evacuate. END_OF_DOCUMENT_TOKEN_TO_BE_REPLACED

Nearly Trapped by the Valley Fire: An Escape Story

Saturday, September 12th, 2015 began much like any other for Terran Compton of Cobb, Calif. He woke up, made his way to the kitchen and began the task of searching for jobs. The 18-year-old has been looking for work in Lake County since he graduated from high school without much luck. He and his 11-year-old brother had the house to themselves because his mother was working at Twin Pine Hotel & Casino where she is a waitress.

In the early afternoon, he realized something wasn’t quite right. He looked out his window and saw thick, dark gray clouds of smoke and a man from his neighborhood running through the streets screaming, “FIRE!” Terran didn’t worry though. There had been several fire calls before, but nothing ever close to their property. He didn’t think it would come toward them.

When Terran’s mother pulled into their driveway at the end of the winding mountain road shortly after, she told him they needed to evacuate. They grabbed only the essentials and loaded them into the car, along with their two dogs. END_OF_DOCUMENT_TOKEN_TO_BE_REPLACED

Whole Community Recovery: It takes the whole community to make a community whole.

When a series of devastating wildfires ravaged California, thousands of homes were lost in minutes and many people were suddenly coping with unprecedented challenges. In small towns with a big sense of community, neighbors came together to help one another, mobilizing with great generosity.

Two weeks later, many community groups and agencies big and small are still working together on the relief efforts—distributing truckloads of relief supplies, while also providing food, comfort and shelter to those affected by these disasters. END_OF_DOCUMENT_TOKEN_TO_BE_REPLACED