Please join us as we say goodbye to 2021 with a look back at some of our favorite stories of the year from all of our lines of service.

Service to the Armed Forces

Lisa Ann Rohr was one of nine Red Cross SAF Mobile personnel who left the U.S. for overseas duty from August 2020 to April 2021. Lisa Ann was one of two Red Crossers initially stationed in Iraq, at the diplomatic post Baghdad Diplomatic Support Center (BDSC).

She says: “My entire ‘boots on the ground’ experience providing virtual services in Emergency Communications Messaging Delivery and Service Member follow-up with my peers, to creative ‘no contact’ distribution of incoming holiday donations, gifts and personal care items, to organizing cooking classes, language classes, and cultural history classes for U.S. and Coalition military forces serving their deployment rotation at BDSC, was a dream come true!”

You can read more about Lisa’s experiences here.

Blood donor Jennifer Sahni credits the Red Cross for saving her life after a challenging childbirth. After delivery, Jennifer’s cesarean incision would not stop bleeding. She received two units of blood, which stabilized her. Two days later, she had to receive a second transfusion with an additional two units of blood. She was able to go home the next day.

“I am so grateful to the people who donated the blood I received,” Jennifer said. “Because of them, I was able to go home and be with my kids. You can read more about Jennifer’s story here.

“These two individuals exemplify the mission of the Red Cross to prevent and alleviate human suffering in the face of emergencies and are to be commended for their willingness to help others in distress.” – Michele Averill, Executive Director of the American Red Cross Central Coast Chapter. You can read more about Linda and Robert here.

Red Crossers and the public at large were invited to a speaker series to learn how the American Red Cross International Services team provides relief and hope in communities around the globe by reconnecting families separated by crises, helping rebuild communities devastated by disasters and working alongside health organizations to eliminated global disease.

Navy veteran Michael Ocaranza awoke earlier this year to flames engulfing his apartment. He had just enough time to grab his dog, Sparky, and race out the door as fire licked around his head.

American Red Cross volunteers and case managers, Betsy Witthohn and Cindy Jones, first contacted Mike during his hospitalization and began to put together resources for his welfare following his stay. During the recovery process, Mike says they became “like friends from the past that I never had before – it’s a good feeling all over.”

You can read more about Mike’s story here.

From all of us in Communications, Happy Holidays and best wishes for the New Year!

If you have a story lead for any one of our writers, please email us at NCCRPublicAffairs@redcross.org.

Posted on September 6, 2021 by larrydietz

Lisa Ann Rohr was one of nine Red Cross SAF Mobile personnel who left the U.S. for overseas duty from August 2020 to April 2021. Lisa Ann was one of two Red Crossers initially stationed in Iraq, at the diplomatic post Baghdad Diplomatic Support Center (BDSC).

As for deployments, Red Cross SAF Mobile Staff are assembled into rotating deployment teams from Continental US and Outside Continental U.S. Red Cross regions for a six-month mission. Lisa Ann, with her eight colleagues, were known as Team 44.

END_OF_DOCUMENT_TOKEN_TO_BE_REPLACED

Extraordinary Volunteer Flies Under the Radar

“I see my job as being in customer service,” says Melissa Kaplan.

That is putting it mildly. Since Melissa joined the Red Cross in 2006, she has become one of the most dedicated and essential volunteers in the Northern California Coastal Region. She volunteers more than 1,200 hours a year and has performed multiple jobs in her 15 years with the Red Cross.

Fellow volunteer Angela Thompson Hunt nominated Melissa for the Gene Beck Award, named for the long-time volunteer and board member.

“She has worked tirelessly for Red Cross for such a long time and all those behind-the-scenes tasks that let other people make progress. I would not have been able to do the kind of work I’ve done if she wasn’t there with me, backing me up.“

END_OF_DOCUMENT_TOKEN_TO_BE_REPLACED

Penny Mount likes to have her hands full of projects and people for whom she cares. During a recent phone chat to talk about compassion calls she made on behalf of the American Red Cross’ Service to the Armed Forces (SAF) program, she was also looking after her 11-month-old great-granddaughter, Jolene. “She’s headstrong, just like her mother,” Penny says. By the end of that same call, Jolene had “creatively decorated herself” and Penny’s counter with her lunch. “Her mother’s not going to be too happy with me,” Penny chuckled.

And that’s just how it is with Penny: breezy, light and full of gratitude.

The compassion calls were part of SAF’s month of service this past February. Volunteers from across the Northern California Coastal Region placed calls to the nearly 3,000 families served by SAF in the last 18 months. They checked on the families’ health and welfare and extended a hand of assistance should any be needed. The purpose was to deliver the Red Cross mission of providing care and comfort to service members, veterans and military families.

END_OF_DOCUMENT_TOKEN_TO_BE_REPLACED 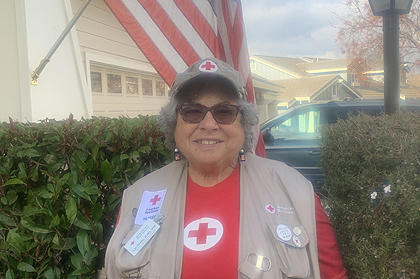 San Jose resident Liz Dietz has been a dedicated Red Crosser for 40 years, supporting community members and colleagues alike with a tireless commitment to our mission. (Photo by Larry Dietz)
_____

Liz Dietz’s work for the American Red Cross — in health services, supporting people affected by disasters large and small; advocating for the needs of military members, veterans, and their families; staffing a regional first-aid team that for years supported major events; and so much more — speaks for itself.

It almost has to, given the challenge of getting Liz to lend her own words to a description of her decades of impactful volunteer work for the Red Cross. END_OF_DOCUMENT_TOKEN_TO_BE_REPLACED 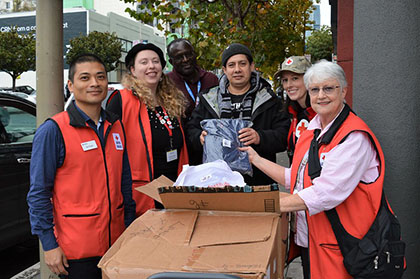 The Covid-19 pandemic has hampered more than a few activities, but it has also spawned a number of opportunities. For example, shelter in place orders forced the canceling of several stand downs. A stand down is an event hosted for veterans where they can avail themselves of a variety of resources in one place. Resources include medical and dental treatment as well as haircuts in a safe and secure temporary environment.

Each veteran attending receives a comfort kit. These kits typically include a toothbrush, toothpaste, washcloth, shaving cream, razor, shampoo, etc. According to Kathleen Lenihan, a retired Army Officer and Service to Armed Forces volunteer, “Walmart and other generous partners donate money, goods or make the kits.”

And with the cancellation of stand downs, a number of kits that were going unused.