‘Go-To Guy’ is the Marin Volunteer of the Year

What does a law enforcement officer do in his spare time? Volunteer to help others, of course. Meet Kevin Sagar, the American Red Cross Volunteer of the Year for Marin County.

Kevin is wrapping up his first year as a police officer with the Sonoma Marin Area Rail Transit, known as the SMART Train.

“The majority of my job is looking for people that are on the train tracks, either oblivious to the trains or trying to hurt themselves. Unfortunately, we can’t be everywhere at the right time, but it is nice when we do get there and spot someone before something happens.”

END_OF_DOCUMENT_TOKEN_TO_BE_REPLACED

“We’re having an earth-” someone said before the live feed cut to black.

An aerial view of the collapsed section of the Cypress Structure. The 6.9 earthquake caused the top deck of the highway to fall onto the lower deck, killing 42 people.

It was October 17, 1989, and Northern California had just experienced a catastrophic event, the Loma Prieta earthquake. The 6.9 tremor ravaged homes, infrastructure, and lives from Monterey Bay through the Bay Area, leaving 66 people dead, thousands injured, and tens of thousands homeless. Like Jim, millions watched the quake strike in real time on live television.

The Red Cross contacted Jim, an employee from St. Louis, within hours of the now-cancelled World Series game; he would trade the Texas Gulf Coast for a new deployment to the earthquake response in California. Having 8+ years with the Red Cross and ample disaster experience under his belt, he felt up to the job. However, as he would learn over the next three months, the Loma Prieta response would be the most challenging of his career.
END_OF_DOCUMENT_TOKEN_TO_BE_REPLACED

A silver anniversary of love

To commemorate the 30th anniversary of the devastating Loma Prieta Earthquake, our region has been gathering stories from people who experienced the quake three decades ago in an effort to encourage preparedness today. The following is a story from 2014. 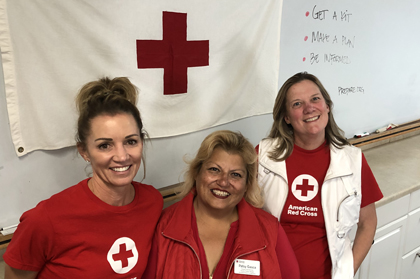 October 17, 1989, started off as an ordinary day for Patsy Gasca. But at 5:04 p.m., the Loma Prieta earthquake struck Northern California, causing widespread damage from the San Francisco metropolis to the much smaller towns in Monterey and Santa Cruz counties. The 6.9-magnitude earthquake shook the ground for 15 seconds, changing Patsy’s life forever. Before the day was done, the 28-year-old Santa Cruz mother of three would volunteer as a case worker, beginning what has become a 25-year love affair with the American Red Cross. END_OF_DOCUMENT_TOKEN_TO_BE_REPLACED

Almost 30 years ago, on October 17, 1989, the devastating Loma Prieta Earthquake rocked most of Northern California. Particularly hard hit were Bay Area and Central Coast communities, areas that sustained loss of life and catastrophic damage. To commemorate the anniversary of this devastating earthquake, our region has been gathering stories from people who experienced Loma Prieta 30 years ago in an effort to encourage preparedness today. The following is a story that was posted on the Central Coast Chapter web site in December 2017. 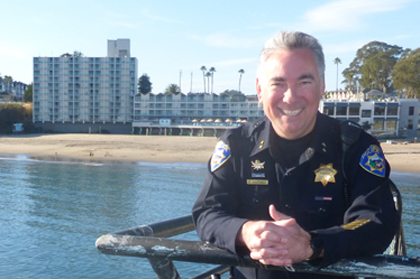 Rick Martinez was photographed at the lifeguard station on the Santa Cruz Wharf in 2017, almost 30 years after the earthquake that introduced him to the American Red Cross.

Before he embarked on a career in law enforcement almost 30 years ago, Rick Martinez dreamed of working in the hospitality industry.

“I had been very interested in doing restaurant or hotel/motel work,” he said.

Then the fatally destructive Loma Prieta Earthquake struck with mega-force in October 1989. END_OF_DOCUMENT_TOKEN_TO_BE_REPLACED

On October 17, 1989, the devastating 6.9-magnitude Loma Prieta earthquake rocked Northern California with the Bay Area and Central Coast bearing the brunt of the impact. The resulting catastrophic damage and loss of life forever changed the landscape, infrastructure, and people of the Golden State.

To commemorate the 30th anniversary, the American Red Cross is gathering stories from those who experienced the Loma Prieta earthquake. Through sharing these stories of recovery and resiliency, we hope to encourage active preparation for the next major event. If you have a memory, experience, or photos/videos from Loma Prieta, we invite you to share them with us. END_OF_DOCUMENT_TOKEN_TO_BE_REPLACED