Full Circle: How the Sound the Alarm Campaign Saved the Lives of a Family in Northern California

Next month, Ashley Koenig of Seaside, California is set to graduate from the U.S. Naval Academy. Recently, she was stunned to learn that her American Red Cross volunteer work as a teenager helped save the lives of a family of six.

“No, ma’am…I did not at all expect that would be something I’d hear.”

In September of 2016, Ashley was 16 years old and a newly-licensed driver. She laughs as she remembers getting lost in a rural area of the city of Hollister. Ashley and several other teens were on their way to an apartment complex,  as part of a Red Cross team that was installing smoke alarms in homes.

Along with Hollister fire fighters and adult volunteers, the teens installed free alarms and taught families about fire safety and emergency preparedness.

END_OF_DOCUMENT_TOKEN_TO_BE_REPLACED

Once a client, now chair of the board

Rebecca Taylor-Ford and husband, Joe, at the Calistoga Lighted Tractor Parade in 2016.
_____

Rebecca Taylor-Ford recently began her second year in service as Board Chair for the North Bay Chapter of the American Red Cross. She stepped into the role in 2019 after several years of volunteering for the Red Cross in various capacities. According to her peers, she leads with a light touch and a self-assuredness that are well-earned from personal and professional experience.

It turns out that Rebecca was also once a Red Cross client.

In 2014, Rebecca and her family survived a house fire that destroyed their home. When the Red Cross showed up, a team member helped walk the family through immediate and long-term recovery, one step at a time.

END_OF_DOCUMENT_TOKEN_TO_BE_REPLACED

A three-alarm fire raged through an 11-unit Millbrae apartment building on the afternoon of Tuesday, April 27. Nearly 60 residents (37 adults, 19 children) were forced to evacuate as fire departments from Millbrae and San Mateo County battled a blaze that ultimately rendered the building a total loss.

Red Cross volunteers arrived on the scene wearing masks and gloves and maintained social distancing during the response. They had also undergone health screening prior to responding, one of several steps the Red Cross has undertaken to keep both its workforce and clients safe during the COVID-19 outbreak. END_OF_DOCUMENT_TOKEN_TO_BE_REPLACED 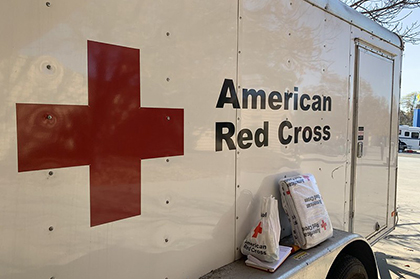 On January 24, 2018, Alan Freberg and Laura Bellizzi were running errands only to return to their apartment and find that their home of twenty-five years had burned down. “There were ten fire engines…there had been an electrical surge,” remembers Laura.

Laura and Alan had no prior experience with the American Red Cross. “The Red Cross was there immediately,” explains Laura. “They gave us blankets and kept offering us food…It was kind of drizzling out, and I was shaking. I finally told them I don’t need another blanket, I’m not cold. I’m shaking because my house just burned down,” Laura recalls. END_OF_DOCUMENT_TOKEN_TO_BE_REPLACED 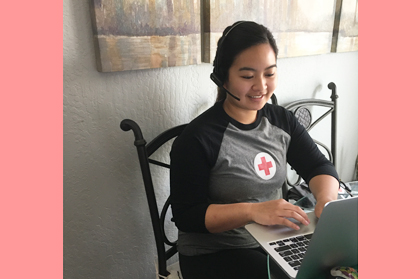 Jillian Balceta, an AmeriCorps worker in the Silicon Valley Chapter, also serves on the chapter’s DAT and Casework teams. She supported the DAT team on two recent calls using her computer at home.
_____

While the Covid-19 crisis has shuttered businesses, postponed community events, and required widespread sheltering-in-place, the pandemic hasn’t changed at least one thing: Individuals and families are still confronted with home fires and other emergencies that require critical assistance from the American Red Cross. END_OF_DOCUMENT_TOKEN_TO_BE_REPLACED

LouAnne Williams keeps it simple. On October 31, 2013, she began to look for ways to give back to her community. She tried to register with a local hospital but felt that they had an overwhelming number of rules and regulations.  Craving something simpler and more direct, she sought counsel from friends and family. Her son-in-law suggested she try the Red Cross, so LouAnne walked into the front door of the Red Cross, literally across the street from the hospital. And she has never looked back.

LouAnne began her journey as a preparedness instructor and now leads her peers in multiple capacities. Last year, she received the San Mateo County Volunteer of the Year Award, something that came as no surprise to her colleagues.