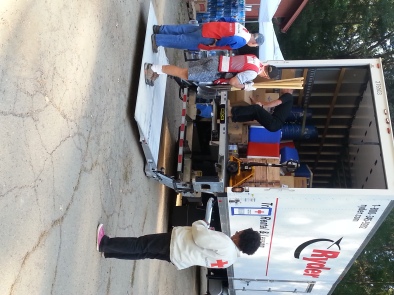 As Red Cross volunteers were dispatched Monday, Oct. 5th in response to torrential rains and flooding on the East Coast, Red Crossers assigned to the West Coast after the Northern California Valley Fire made a special delivery of supplies for a hard-hit Cobb Mountain community.

Leaders of the Mountain Lion’s Club in Cobb, located on state Highway 175, asked for specific items that they said residents needed after their community was finally reopened after the lifting of mandatory evacuation orders that came as the fire roared toward Cobb nearly a month ago.

Rose Geck, a 31-year resident of Cobb and a Lion’s Club volunteer who helped direct the unloading of supplies, said the community is incredibly grateful for the emergency and recovery response it has witnessed.

“The landscape here will be changed for many, many years,” she said.  “It will take a long time for the Old Cobb to come back.  It will actually be the New Cobb.  There’s a lot of hope.”