Through the Ashes, Love Perseveres

It wasn’t the proposal he had been planning for months in his head.

Following the Valley Fire, Eric, his girlfriend Annette, and their 10 month old Eric Jr. returned home to find the ash-ridden remains of their Middletown apartment. As his eyes combed the family’s black-charred belongings, he breathed a sigh of relief. Sitting there in plain sight, perfectly perched on top of the scorched debris of the TV, was the engagement ring that he had been hiding from his future fiancé.

“It was happy and sad at the same time,” said Annette, “Happy because the ring was still there, sad because we had lost everything else.”

“I saved for months, a little bit out of every paycheck,” said Eric, “She kept asking me, ‘Where’s the money going?’ and I had to lie to her!” he said with a smile.

He had been keeping this secret, patiently awaiting their anniversary, so he could pop the question. He kept the ring in a seemingly safe hiding place. That was until the Valley fire broke out.

Eric and his family went to the evacuation site, but his mind went straight to thoughts of his dream proposal. After months of nervous anticipation, Eric was devastated. As they sat amongst the crowd of evacuees, he told Annette the bad news – his surprise had likely been lost in the fire.

For Eric and Annette, finding the ring was one small piece of hope that they could hold on to after suffering such heart-breaking loss. When the fire began, they had been out of town visiting family. They had no time to pack or save anything.

“My parents called and told me they were evacuating,” said Eric, “We tried to come back and get some clothes, supplies… but by the time we got there the roads were closed.”

With just the clothes on their backs, the young family made their way to the Red Cross shelter at the Napa County Fairgrounds in Calistoga. There they found warm meals, lodging, and even clothes and toys for little Eric, Jr.

“Everyone wanted to help us,” said Annette, “There has been so much support.” 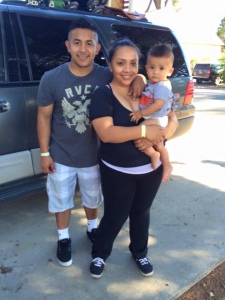 But the journey is just beginning for this newly engaged couple. The recovery process after a disaster can be long and overwhelming. The simplest needs like clean water, food, and medications are not taken for granted by the residents of Middletown, and the Red Cross has been there every step of the way.

Volunteers in Emergency Response Vehicles went block by block through Middletown, delivering bottled drinking water, rakes, gloves, dust masks, ice chests, snacks and sifters. Hundreds of families, including Eric and Annette, received these vital resources as they began to pick up the pieces that are left of their once treasured homes and belongings. 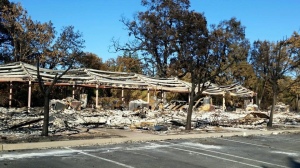 After seeing the remnants of their apartment and finding the ring, Eric and Annette made their way to the Red Cross resource center where they met with Linda, a volunteer caseworker. The Red Cross was able to provide the family with financial assistance to help with the recovery.

Now, with the support of the Red Cross and their community, Eric and Annette will start over. As they turn the page to begin a new chapter in their lives, they will be forever changed by the Valley fire, but most of all they will remember the arms of comfort and support they found in the moments after.

The Valley Fire may have destroyed their home, but it doesn’t hold a candle to the flame of their love. This young family has persevered through the devastation, and come out the other side of the fire with an breakable bond and a story that will stay with them for the rest of their lives.