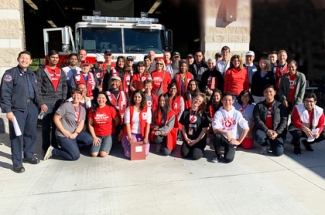 About 50 volunteers from the Silicon Valley Chapter of the American Red Cross and the San Jose Fire Department fanned out this past Saturday in the Village of the Four Seasons in San Jose, as a part of the ongoing Red Cross Sound The Alarm campaign.

Volunteers met at San Jose Fire Department Station Number 35, where they were provided with breakfast donated by Chick-Fil-A. After breakfast, Chapter Board Chair Terry Unter conducted training; he was supported by Douglas Moses-Batson, who managed the very successful event.

SJFD Chief Sapien addressed the volunteers and stressed the importance of the event and the lives that could be positively changed due to the added safety provided by updated, functioning smoke alarms.

The volunteers were divided into 10 teams with another added in the late morning due to the high demand. Each team had an installer responsible for the actual installation and an educator who provided training about the alarms, fire and earthquake safety, and the importance of escape routes. A documenter, recording the number of alarms installed and demographics of each family, rounded out the team.

The event was a great success in part due to the tremendous job of advance canvassing undertaken by Captain Doan of the SJFD, the Red Cross’s Nikki Rowe, and some of our youth volunteers who had pre-booked appointments with 58 homes. Canvassing continued during the event that, with great support from the SJFD, resulted in 14 additional home installations.

The Red Cross responds to nearly 64,000 disasters a year, the majority of which are home fires. Working smoke alarms in a home cut the risk of death by half, and having an escape plan further improves the odds of survival. That’s why the Red Cross launched the Home Fire Campaign in 2014.

About the author: Larry Dietz is a Colonel (Retired), U.S. Army Reserve, as well as a dedicated Red Cross public affairs volunteer in the Silicon Valley Chapter.