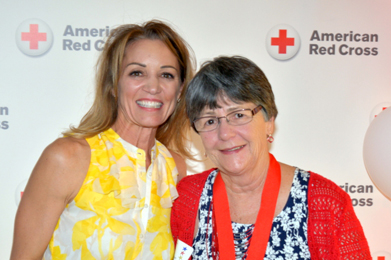 CARMEL, CA (June 21, 2018) — The American Red Cross of the Central Coast honored 15 individual volunteers, a volunteer team, three other organizations, and one business at its recent Volunteer Recognition Dinner for Monterey, San Benito, and Santa Cruz Counties. The annual event was held at Seascape Golf Club in Aptos.

The evening’s top award, the Clara Barton Award, was given to Janet Packer of Santa Cruz County (Aptos). The award, named after the founder of the American Red Cross, recognizes a volunteer for service in a series of leadership positions held over a number of years.

Packer has been a Red Cross volunteer since the organization’s massive response to Hurricane Katrina in 2005. Since then, she has deployed to more than 30 national-level disaster responses, including to Hurricane Sandy, for which her service included driving a Red Cross emergency response vehicle cross country.

Closer to home, Packer has most recently filled the role of Client Casework Lead for the Central Coast Chapter, organizing the assistance that she and her fellow Red Cross volunteers provide to residents whose lives are turned upside down by fires, floods, and other local and regional disasters. Working out of the chapter’s Santa Cruz office, Packer is highly regarded for her tireless commitment to the Red Cross — and for her kind and caring commitment to the many people the organization serves.

Other award recipients honored at this year’s dinner include:

In addition, a number of volunteers were honored at the event for the large number of hours they devoted to the Red Cross in service during the 2017 calendar year.

“While the annual event spotlights a number of key volunteers, we recognize that all of our volunteers play a vital role in responding to disasters, preparing our community, and supporting all Red Cross lines of service locally and beyond, says Michele Averill, CEO of the Central Coast Chapter. “It is truly an honor to get to work with such dedicated and wonderful people. All of our volunteers give selflessly of their time, and the Red Cross would not be able to provide the help and support we do without them.”

Dane Lobb, a member of the Central Coast Chapter’s Board of Directors, joined Averill in presenting the volunteer awards at this year’s recognition dinner.

Photos from the dinner can be found on the Central Coast Chapter’s Flickr site: flickr.com/photos/sccredcross/albums.

Become a Red Cross Volunteer: You can make a difference in Monterey, San Benito, or Santa Cruz County by becoming a volunteer with the American Red Cross. Volunteers constitute about 94 percent of the total Red Cross workforce to carry out our humanitarian work. Red Cross volunteers are trained to meet the needs of those affected by disasters, providing food, shelter, and comfort for families affected by major disasters such as fires, floods, and earthquakes as well as helping local residents prepare for and recover from emergencies of all kinds. We’ll find the position that appeals to you and allows you to use your skills and talents. Email VolunteerCCC@redcross.org to get started.

About American Red Cross of the Central Coast:
With offices in Monterey, San Benito, and Santa Cruz Counties, the American Red Cross shelters, feeds and provides emotional support to victims of disasters; supplies about 40 percent of the nation’s blood; teaches skills that save lives; provides international humanitarian aid; and supports military members and their families. The Red Cross is a not-for-profit organization that depends on volunteers and the generosity of the American public to perform its mission. For more information, visit our web site at redcross.org/centralcoast or call us at 831-624-6921. You may also find us on Facebook and Twitter.