Volunteers join the Red Cross because they believe in helping others 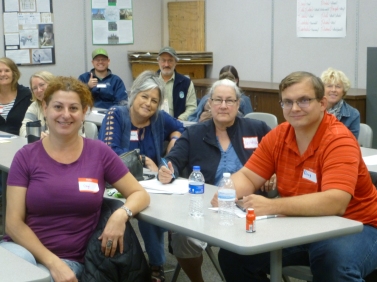 The Red Cross has thousands of new people interested in volunteering, following the wildfire disaster that swept through the wine country north of San Francisco. Many of them were deeply affected by the fires, themselves.

Jordan Franck, for example, awoke the night of the fire when he smelled smoke in his home behind the Coffey Park neighborhood. He looked out the window and saw the nearby flames. He called a friend to wake him up, then drove away and ran into a gridlock of fleeing traffic.

“It’s so important to have a plan, a disaster plan, with your family and friends,” he told us. “Our group of friends decided to meet up at a nearby neighborhood, which we did, after getting separated in the confusion of leaving. Of course, once we met at our friend Cindy’s house, we were evacuated again! But, at least we were together.”

Jordon is in the last day of a 3-day Boot Camp of Red Cross training that he signed up for months ago, ironically. He is training in logistics, supply, and shelters.

“I work more than full-time at a hospital and the challenge for me is finding time to volunteer. But you have to make time for the most important things in life. I took a vacation day in order to do this training and will do what I can when I can.”

Jordan is typical of Red Cross volunteers. “I really appreciate the Red Cross mission. It’s humanitarian and that’s me. That’s why I got into healthcare. The Red Cross matches my values.”

Gigi Babbitt agrees. She, too, signed on for 3 full days of Red Cross training, lives in the Santa Rosa area, and was evacuated twice during the firestorm.

“I am so sympathetic to those who lost loved ones or their homes,” she said, “because it is such a devastating loss.”

Like Jordon, she works full-time and is also studying to be a CPA. But she says she will find the time to volunteer with the Red Cross.

“I love people and want to help and serve. I chose the Red Cross because they have a great reputation, and I believe in what they do,”

She also believes in her community.

“We will rebuild, piece by piece, and the rest of us in this community will be here to support others.”