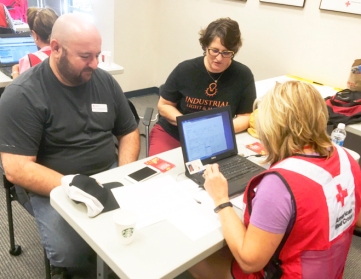 John Ghigliazzi and his wife, Angela, are helped by a Red Cross worker.

The Red Cross chapter with jurisdiction in the North Bay — California Northwest — has 16 board members. Of those 16, 4 board members and their families lost their homes in the devastating fires that ravaged the area.

Today, the first applicant in our new Santa Rosa service center was local board Chair John Ghigliazza and his wife Angela. They have 3 teenage sons and are now homeless because of the fires.

They came right to the Red Cross to begin their recovery process. “I never thought I would be on this side of a disaster,” John said.

After going through the process of becoming a Red Cross client, John walked through the center, pausing to thank each and every volunteer there.