Tiki Dellamora represents everything that is good about the Red Cross 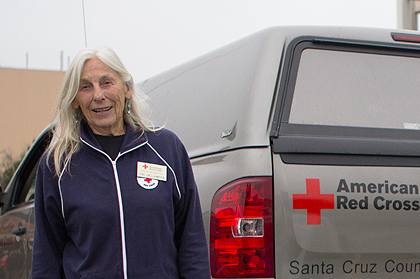 Tiki Dellamora is a beloved member of the Central Coast Chapter volunteer team.
_____

Productive, dependable, and tireless are three adjectives regularly used to describe the thousands of volunteers whose work is at the heart of everything the American Red Cross does to support individuals, families, and communities throughout our country.

But take an extra minute to observe these volunteers on the job. If you do, it’s hard to overlook one other characteristic they all seemingly have in common: a sense of optimism that brings a smile not only to the faces of the many people they support and serve, but also to the faces of the Red Cross colleagues working at their side.

“In our Central Coast Chapter, perhaps no one epitomizes that can-do, joyful spirit more than Tiki Dellamora,” says Chapter CEO Michele Averill, who announced recently that Tiki was a recipient of the organization’s prestigious Clara Barton Award.

In fact, when Averill shared the “Tiki” news during the chapter’s Volunteer Recognition Event, held virtually in December because of the COVID-19 pandemic, the event’s “chat box” almost crashed because of the number of congratulatory messages. Just in case anyone needed more evidence of how revered and adored Tiki is by her Red Cross peers, here are two of the many messages shared by attendees that evening:

Asked later about her award and the reaction of her fellow Central Coast volunteers, Tiki’s response was (typically) warm and (just as typically) unassuming: “Oh my gosh; that was very sweet,” she said softly.

Tiki began her Red Cross work in the 1950s, teaching swimming at venues like the “Plunge,” the ocean-fed pool at the Santa Cruz Boardwalk. Not sure which young woman in this historic photo is our Tiki? Click here.
_____

Now 85, Tiki says she’s “not so good with dates anymore.” But when pressed to guess, she believes her relationship with the Red Cross began when she was around 18 — after she read and responded to a volunteer recruitment ad in the Santa Cruz Sentinel. “I think it was the early 1950s, and they were looking for volunteers to help teach the swimming classes that the organization offered back then,” she says. “And that’s what I did for the Red Cross for more than five years.”

Back then, the swimming lessons were a fifth-grade requirement locally, and the classes were taught at the Plunge, an ocean-fed pool at the Boardwalk in Santa Cruz. She also helped teach an adaptive swimming class for special-needs children at a pool in the Pleasure Point area of town.

By the mid-1980s, after raising two children, Tiki returned to her Red Cross volunteer work, discovering the organization’s disaster-response activities — and the fulfillment that came with that work. Like many longtime volunteers from this part of California, she really embraced Red Cross disaster work in the day, weeks, and months that followed the 1989 Loma Prieta Earthquake.

“The chapter back then had volunteers but not many other disaster resources,” Tiki says. “I remember that we had an old unmarked Suburban that we used as a feeding van; so to help identify ourselves, we painted it white and had Red Cross lettering painted on it.”

The chapter’s Loma Prieta response was a ’round-the-clock operation: “We canteened for the first responders for weeks and supported the shelters set up for the many people affected,” she says.

That earthquake deployment also served to introduce Tiki to a new volunteer, Patsy Gasca, who would become the Disaster Program Manager for the Central Coast Chapter. It’s a relationship that Gasca says is a highlight of her own 30-plus years with the Red Cross.

“Just being in Tiki’s presence is what I love,” Gasca says. “Her humanitarian side oozes out of every one of her pores. Whatever personal or work challenge you may be confronting that day always evaporates in Tiki’s presence.”

But it’s more than her kindness that has impressed Gasca. Tiki always steps forward when a volunteer is needed — whether the task is heroic, mundane, or something in between. “When we were doing our monthly Sound the Alarm events before the pandemic, Tiki made every one of them — whether it was near her home in Santa Cruz or far away in Southern Monterey County.”

On the national front, Gasca says she is unsure exactly how many disaster deployments Tiki has undertaken. “Because the Red Cross systems have changed over the years, I’m not sure anyone has a completely accurate count of her deployments,” she says. “But I’m sure she has deployed to more than 50 disasters.”

Tiki is proud of that deployment record, saying she has responded to hurricanes, wildfires, earthquakes, tornadoes, floods, and rescue operations — and has served as far away from home as Puerto Rico (twice). She also deployed twice, for a total of two months, to Ground Zero in New York after the 9/11 attacks.

But her affection for the organization is not limited to disaster responses. “I’ve loved all of it,” Tiki says. “There’s such a variety of people you meet and a variety of jobs you get to do. You also see the power of people — who often start out not knowing each other — working together to provide assistance to others in their time of need.”

Tiki also treasures the little Red Cross moments, acquired during many decades of service, that she will forever hold dear. “I remember one time when I deployed to Florida after a hurricane there,” she says. “The group I was with drove to an area where help was needed, and the first thing we saw were the members of one particular family. They had lost their home, and they had no clothing or possessions left; but they had found each other and discovered that each family member was still alive.”

“They were hugging and kissing because each one of them — individually — thought that the others had perished,” she says. “There are things like that that even I can’t forget.”

Become a Red Cross Volunteer: You too can make a difference by becoming a volunteer with the American Red Cross. Volunteers constitute about 90 percent of the total Red Cross workforce, supporting our humanitarian work, our work in blood services, and our work in every other Red Cross line of service. We’ll find the position that appeals to you and allows you to use your skills and talents safely. Go to redcross.org/volunteer/become-a-volunteer.html to get started.