You could say Howard Hinkson was born to serve having been raised in a Navy family moving around the US much of his childhood. Howard started with the Red Cross as a volunteer supporting the 1989 Earthquake. He worked logistics, sheltering, and mass care. He served in a variety of capacities, including volunteer, reserve, and paid staffer. Howard had just come off what he called ‘his second retirement’ when he decided that he needed to return to Iraq. Howard is no stranger to Iraq having deployed previously to COB Speicher, Balad and Camp Victory.  The American Red Cross Service to the Armed Forces (SAF) deployment overseas can be “laborious, tedious and dangerous” Howard said. As it turns out, the rewards outweigh all of that. 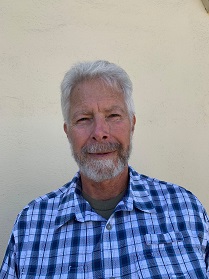 Howard started with the American Red Cross as a volunteer supporting the 1989 Earthquake. He worked logistics, sheltering and mass care.

The actual deployment process starts in Germany with three weeks of pre-deployment training and processing. More medical screening and mental health evaluation are included. Other subjects include learning how to escape from a military vehicle rollover (in a simulator), how and why to wear a gas mask and a host of other related training on cultural and security subjects.

Specialized Red Cross training includes how to process casework and how to serve as the emergency communications link between deployed service members and their families.

During his last deployment, Howard was stationed at Sather Air Force Base or the Baghdad Diplomatic Support Center (BDSC) adjacent to Baghdad International Airport. Howard and a colleague were responsible for operating the Red Cross office from 0800 to 2400 every day. They were also on call for emergencies that took place from midnight to 0800.

The primary mission of deployed SAF associate is to serve as the emergency communications conduit between deployed personnel and their families. In addition to service members, SAF provides services Department of Defense and Department of State civilian personnel and contractors. These include a wide range of people from interpreters to construction workers.

Red Crossers Williams and Hinson with Pen Walker in Iraq

Howard estimated that he touched 1,500 messages during his six months in country. They ranged from critical – the need to get a service member home before his mother died to more routine. Howard and his colleague also provided a small amount of crisis counseling.

The Red Cross office was also supported by some volunteers on the compound. Other services SAF provided included Canteen and Morale Services. Howard baked bread for a “Beverage and Bread” social during the week. In addition to service members, the SAF office was visited by many of the physicians serving at the Combat Support Hospital at the BDSC.

While the work is not easy, the rewards are incredible. Howard recalled one service member who expressed his gratitude for “the Red Cross guy who got me home,” so he could be with his mother before she passed away.

Howard’s advice for anyone considering an overseas SAF deployment: “Go for it! Don’t be daunted by the process and remember what brought you to the Red Cross in the first place – the mission.”