The 129th Rescue Wing is part of the California Air National Guard, and is based at Moffett Field, California. “That others may live.” Is the motto of Air Rescue and typifies the wartime mission of combat search and rescue and the peacetime missions of finding and rescuing distressed people on shifts, lost or injured hikers and medical evacuations. The unit consists of over 1,000 members, 700 of whom are part time California Air Guard Members.

A Pavehawk Helicopter takes to the sky, its occupants’ legs dangling in the air.

The unit is in high demand and has a very upbeat operational tempo. Portions of the unit are mobilized for missions in Afghanistan, Iraq, Djibouti and around the world. The Defense Department (DOD) has recognized that it is critical that family members are prepared for service member deployments. The DOD Yellow Ribbon Reintegration Program is a DOD-wide effort to foster the well-being of National Guard and Reserve members, their families and communities by connecting them with key resources and providing important information both before deployment and after. 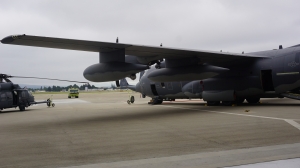 A helicopter is dwarfed by a mammoth C130 Search and Rescue Aircraft on the tarmac. 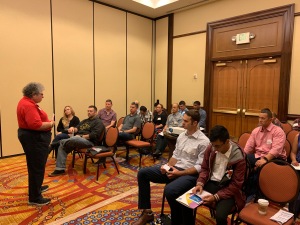 The military believes in having a bit of fun as well. On September 7, 2019 the 129th hosted their annual Family Day. This included a BBQ, children’s games and a number of resource providers. Liz Dietz, Larry Dietz and Theresa Godines represented SAF at this gathering of over 700 people. Liz gave a short overview and the team manned a resource table during the event. 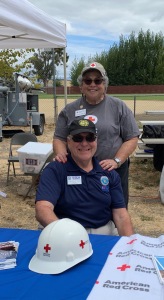 Liz and Larry Dietz are all smiles during the 129th Air Rescue Wing’s Family Day on 9/7/19.

Service to the Armed Forces is a core mission of the Red Cross. Most people do not realize that almost half of America’s military force is either National Guard or Reserve. While the number of active duty bases in the Northern California Coast Region may have declined, there are still a substantial number of National Guard and Reserve personnel in the region who appreciate the support provided by the Red Cross and Service to the Armed Forces.