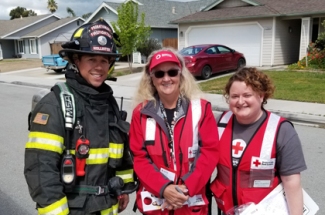 Helen Cosentino, right, and Kelly Donnelly-May are thanked by John Hulliger, one of the responding members of the Hollister Fire Department. Hulliger, himself, has assisted with many of the Red Cross “Sound the Alarm” events in that community.

Two Red Cross workers, preparing for a recent “Sound the Alarm” event in the city of Hollister, saw first-hand why the organization’s campaign to reduce home-fire injuries and deaths is so important.

“We were in a particular neighborhood, going door to door to let residents know of our upcoming smoke-alarm installation event there,” says Helen Cosentino, the Disaster Program Specialist for the Central Coast Chapter. “But as we approached one home, we heard what sounded like a smoke alarm that was already going off. My volunteer partner ran to the front door, pounded on it, and screamed for the residents to get out.”

Having been alerted to a kitchen fire by their smoke alarm — and by Red Cross volunteer Kelly Donnelly-May — a man and woman quickly emerged; Cosentino, meanwhile, wasted no time dialing 9-1-1 on her cell phone. Within minutes, the Hollister Fire Department was on the scene, ensuring that the home was vacant and that the fire — which was confined to the stove area — was extinguished.

For Cosentino, the incident on April 16 illustrated perfectly why the American Red Cross launched its Home Fire Campaign almost five years ago:

In fact, it is believed that the campaign’s Sound the Alarm home visits — in which Red Cross volunteers, working with local fire departments and other partners, install free smoke alarms for residents that need them — have already saved more than 550 lives since the national campaign began!

“Having smoke alarms just in that one home on that one day may have prevented a tragedy,” Cosentino says.

But the Red Cross wants to do more, and during a three-weekend push this spring (April 27-May 12), the organization has set a goal of installing an additional 100,000 smoke alarms.

In fact, the Sound the Alarm event that Cosentino and “Kelly May” had been preparing for that afternoon in Hollister was part of that spring push. And on Saturday, April 27, 28 volunteers from the local chapter and Hollister Fire Department installed 130 alarms in 55 homes, making 170 residents safer in that city and in nearby Tres Pinos.

Read about the great work our regional Sound the Alarm teams did in just April alone.