Ki Daniels poses in front of the Sebastopol Center for the Arts, where she was staying in an American Red Cross evacuation shelter after flood waters from the Russian River inundated her home on February 26, 2019. (Photo: Barbara Wood)

Ki Daniels, who has been living in an American Red Cross evacuation shelter since February 26, 2019 when forced to flee as the Russian River overtopped its banks, knows what it takes to recover from a disaster. That’s because in October 2017, Ki lost her home and all she owned in the Tubbs Fire, a loss from which she only recently had begun to feel she’d recovered.

Nonetheless, Ki, who had just recently completed renovating a home she thought would give her a fresh start on the banks of the Russian River, is upbeat about her future. She says her second loss of a home and most of her belongings in less than two years is “another opportunity for re-creation.” And she credits the Red Cross – which helped her recover after the Tubbs Fire and in the Sebastopol shelter gave her a safe, warm place to sleep, medical care, emotional support and meals – with helping to make that “re-creation” possible.

“The services that the Red Cross provides to those fleeing disaster is the foundation for their tomorrow,” Ki says. “I’ve been so well cared for.” She credits the Red Cross for helping her to manage her medical problems, as well as providing medication and medical supplies and providing a special adjustable, heavy-duty medical cot on which to sleep.

“It’s little things like that that make the world look different for someone who has medical problems,” she said. 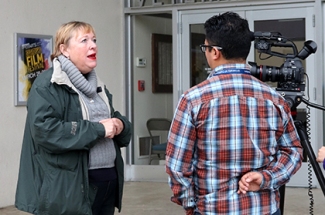 Ki Daniels shares the story of her recent escape from Russian River flood waters with a news reporter in front of the evacuation shelter in Sebastopol that the American Red Cross opened on February 26, 2019. (Photo: Barbara Wood)

Ki, who has a master’s degree in clinical psychology and a business as a Feng Shui consultant, said she arrived at her Russian River home after an out-of-town trip only to learn the area was being evacuated. “I just grabbed a trash bag,” she recalls. She filled it with her medications, a blanket and pillow, and a few papers. A sheriff’s deputy took off his jacket and gave it to her. “I was freezing,” she remembers.

After arriving at the shelter in the Sebastopol Center for the Arts, “the Red Cross absolutely gave me all the additional support I needed,” Ki says. Red Cross volunteers helped her find a change of clothing and other necessities. “My heart’s not broken – it may be cracked, but it’s not broken,” Ki says. She also says that her attitude about the future changed while she was in the shelter, especially after she volunteered to help the Red Cross assist some of the shelter residents.

About the author: Barbara Wood is a Red Cross volunteer writer with our Silicon Valley Chapter.