A Tie That Binds 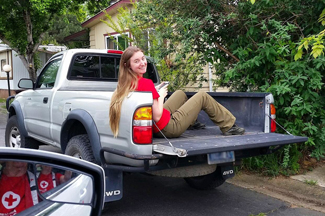 American Red Cross volunteer Sierra Marcelius received the Gene Beck Memorial Volunteer of the Year Award in June of this year. When asked what the award meant to her on a personal level, Sierra reflects, “At the time it didn’t mean a lot; I didn’t do this to get an award. But now that I’ve left, it means a great deal. The people that I worked with thought I did a good job and valued my contribution to the team.”

No stranger to hard work, Sierra graduated from San Diego State University in 2016 while interning with the Red Cross. She then took a Disaster Workforce Specialist position in Redding. By December of 2016, she became the Disaster Program Manager. In the spring of 2017, Sierra was accepted to UCLA law and moved to LA that summer. Unfortunately, her mother was diagnosed with cancer, and Sierra took a leave of absence, returning to Sonoma County in September. Less than a month later, she got a call.

“I had had a meeting with the local Disaster Action Team, but I got the call on that Sunday, October 8th,” she says. “I had just driven back though Tubbs Lane and Calistoga on the way back from a camping trip.” She reported to the office, and leadership asked her to work as a shelter manager. Without even unpacking the car, Sierra raced to the Finley Community Center with another volunteer, 17-year-old Jackson Foley. There they met Mary Ellen Taylor and opened a shelter for what would amount to more than 1,000 people.

For her first experience with the California Northwest Chapter, Sierra worked five days then took a two-week break. Then she came back and assisted in transitioning the shelter to Catholic Charities. At that point, Sierra “jumped into the recovery side,” and found a calling of sorts. “This is my favorite part,” she says. “I prefer to work in recovery. I managed recovery from December through February when the Red Cross ended the direct client assistance and transitioned services to other local agencies.” Sierra then moved to workforce engagement training for event-based volunteers. Sadly, her mother passed, and it was time for her to make her way back down to LA.

Even though Sierra followed her dreams to LA, the Red Cross is never far. She has already reached out to the local chapter and signed on with the End Home Fires Campaign. Moreover, once she’s finished law school, Sierra envisions a likely return to the Northern California Coastal Region. She hopes to come back to the Bay Area to practice law and be closer to family, and NCCR.

Her advice to anyone considering volunteering with the Red Cross? “First thing – make sure it’s a good match, especially disaster relief,” says Sierra. “When it comes to disaster relief work, you want to make sure it’s something you can see yourself doing and something you want to do. If so, you will be an asset. You’ll help in both the steady state and during a disaster. Steady state is where a lot of the groundwork happens to prepare.”

Sierra now knows the value of her contributions. She also knows that there will always be work to be done in local communities. And that is why she received the award in the first place.