Students learn about Clara Barton, support the organization she founded 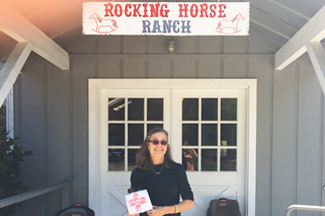 The $400 check, made out to the American Red Cross, was delivered to the Central Coast Chapter’s Santa Cruz office on schedule this summer. “We’ve been sending a check like that at the end of the school year for about 15 years now,” says Nancy Cohen, owner-operator of Rocking Horse Ranch Preschool in the nearby community of Soquel.

Cohen is quick to say that the gift is a result of the generosity of the students — and families — her preschool serves.

While the check has been a regular occurrence in recent years, its reason for being actually dates back to the 1800s. “In a very real way, it is a tribute to Clara Barton, the founder of the American Red Cross,” Cohen says.

Cohen recalls her discovery, many years ago, of a library book titled Intrepid Women in History. It featured stories of pioneering people like aviator Amelia Earhart and anthropologist Jane Goodall.

“I had wanted to expand the history we were introducing our young students to so that it included some discussion of courageous women,” Cohen says. “One of the people in that book was Clara Barton, and I was immediately impressed by how fearless and big-hearted she was.”

In talking with Cohen, it’s clear how truly inspired she was — and still is — by the woman who founded the American Red Cross in 1881. “The story about Clara Barton in the book described her life when she was a little girl, the period when she learned to be a nurse, and the amazing work she did to help our soldiers on the battlefield during the Civil War,” Cohen says. “It gave the reader a real sense that Clara Barton was often scared by what she needed to do, but overcame those fears because people needed help.”

It’s a great lesson for even very young children to learn, Cohen says. “We all get scared to try new things. But I wanted our students to know they can overcome those fears and do amazing things.”

The “intrepid women” theme eventually became the subject of a four-week unit that is now part of the school’s curriculum each May.

During the unit, the students are encouraged to support — in affordable ways — an organization that supports so many others in our communities. “All these years after Clara Barton founded the Red Cross, the organization is still there, still helping people,” Cohen says. “So we tell our students that they can choose to support the Red Cross with any change that they find or money that they earn. It can be a very small amount, but it adds up each year.”

Within weeks of sending the annual check to the Red Cross this summer, Cohen received a handwritten thank-you card in return. “I get a sweet note each year from a person I know in the Santa Cruz office, and I read it to our students,” she says. “It really means a lot to them to see how much their generosity is appreciated. We are always trying to teach the kids about compassion, and being someone who helps others … and Clara Barton exemplifies that.”

Read more about Clara Barton — and about some of our amazing regional volunteers who have received the Red Cross award that bears her name.