My name is Jeff Baumgartner, and I am the Executive Director of the American Red Cross of the California Northwest Chapter, which serves the one million residents of Lake, Mendocino, Sonoma, Napa, Humboldt, and Del Norte Counties.

Lake County has been struck by four years of unprecedented wildfires. Each time tragedy has struck, this community responded heroically. Your Red Cross team, of mostly volunteers, has been honored to be here to serve alongside this community during each one of these emergencies. Representing your local Red Cross team, I want you to know that we try to learn from each response to do better in the future. Since 2015 we have steadily made changes to our policies and readiness to better serve the community, but we have more work to do. I am so thankful for the community leaders and partners who have already reached out to help make those changes together.

During the past two weeks, we, in Lake County, have been called to action again in the face of a new firestorm. Whether it’s serving meals, staffing evacuation centers, providing much-needed healthcare, coordinating community donations, or simply comforting a person in distress, Lake County has made this a community-led response. 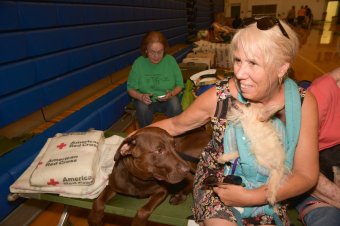 I want to acknowledge we are all human and that the same chaos and stress that drives the need for service also bring miscommunication and tension. To that end, I want to address some of the more serious allegations about the Red Cross shelters in Lake County in recent days. The primary goal of a Red Cross shelter is to provide for peoples’ basic needs: A safe, comfortable place to sleep, food, water, medical service, and emotional support. Thanks to many community members, partners, and more than 250 Red Cross volunteers, no shelter has gone without food, water or basic needs as stated on some social media feeds. Although there were instances of logistics and communications issues that caused delays of some meals and needed supplies to be accidentally turned away, those issues were corrected to ensure needs were met.

I’ve also learned of a series of incidents on Sunday August 5th and Monday August 6th, which occurred while Red Cross and our government partners were all scrambling to arrange more than 2,500 new shelter spaces elsewhere for what appeared to be the imminent evacuation of Lower Lake, Clearlake, and their existing shelters on Sunday night. Thank goodness that evacuation was not required thanks to the heroic actions of firefighters and some help from Mother Nature.

Regrettably, in the chaos, a group of local community members and volunteers felt dismissed from the feeding role that they had graciously taken on through the Salvation Army at the Red Cross Shelter at Lower Lake High School. They were not notified that Salvation Army agreement with the Red Cross was coming to an end and a new feeding partner, World Central Kitchen, would be taking over food preparation for all shelters on August 6th and that they could volunteer with them. I regret that this happened, and agree that the community members should have been able to participate in caring for their community after demonstrating their willingness and ability to do the job.

We are meeting with community members like Fabien Baurez, Tina Clarke, and Tommy Mingori to listen to their concerns and experiences and work together to build a better plan for how to respond together in the future.

At your service,
Jeff