Red Cross volunteers from the Silicon Valley Chapter take time out from their work on February 24 to pose for a photo at the mobile home park.

On Saturday, February 24, volunteers from the American Red Cross of the Silicon Valley installed 164 smoke alarms in the Moss Creek Mobile Home Community in San Jose. The work was done as part of the Red Cross’ regional Sound the Alarm – Save a Life campaign. 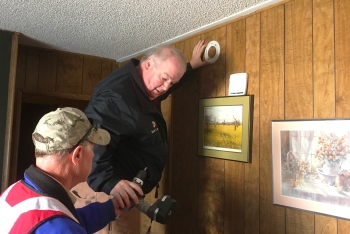 The installations in San Jose took place in 53 of the 107 homes in the Moss Creek community. “This was by far the highest percentage of homes serviced in a community that we have achieved to date,” said Terry Unter, chair of the chapter’s Board of Directors and a Disaster Cycle Services volunteer.

Terry was one of 49 volunteers who worked that day under the direction of Site Manager Doug Moses-Batson; supporting their work were Captain Bien Doan of the San Jose Fire Department and the crew of Engine 24. The Red Cross provided the smoke alarms that were installed; Orchard Supply Hardware donated combination smoke and carbon monoxide alarms.

In addition to installing the alarms, volunteers helped each home’s residents develop a fire safety and escape plan and also reviewed earthquake preparedness information with the residents.

The installation of smoke alarms is critical because experts say that residents have as few as two minutes to escape their homes in the event of a fire. By immediately notifying residents of a fire, smoke alarms can give them the critical time they need to escape.

“I am grateful to you for doing what you are doing,” Captain Doan told the Red Cross volunteers that day. “One day you will find out there was a fire and that you saved a life; you will feel it in your heart.”

Volunteers in San Jose that day were of all ages and from varied walks of life. Kevin Davis and Rebecca Aguirre found that the event was an eye-opener for them because they didn’t believe anyone could live in California and not understand the need for earthquake preparedness. “People were very grateful and it was really fun,” Rebecca said.

Douglas Moses-Batson, the volunteer site director, said that he likes volunteering for the Red Cross because “it feels good to help people out.”

Thanks to the commitment and cooperation of Community Management, over 40 appointments were pre-booked, eliminating the need for door-to-door canvassing. The volunteers were divided into nine teams. Each team consisted of an installer and assistant installer, who were responsible for finding the best places to locate the alarms and installing them. Another team member, an educator, provided fire safety training and smoke alarm maintenance training; the educator also helped residents develop an escape plan and provided them with a fire safety checklist and a local hazard safety checklist.

Before the volunteers were dispatched they received a safety and training briefing by Liz Dietz, a nurse whose volunteer service to the Red Cross totals nearly 40 years.

Captain Doan summed the event up best: “People don’t realize how life changing these events are for both volunteers and residents. The feeling of satisfaction has a positive domino effect far beyond the event itself.”

You can volunteer at an upcoming installation event by signing up at soundthealarm.org/norcalcoastal.

About the author: Larry Dietz is a Colonel (Retired), U.S. Army Reserve, as well as a dedicated Red Cross public affairs volunteer in the Silicon Valley Chapter.