Two 17-year-olds perform beyond their years during NorCal fires 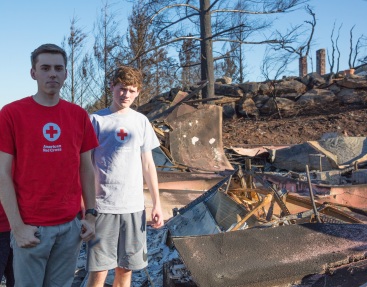 Sunday, October 8, 2017 started out like any other Sunday in the beautiful Northern California wine country. Some may have attended church service, some worked, some did homework, some did housework, and others may have visited with friends and family. But for many, this day would become one of the most frightening days of their lives. As the day went on, the wildfires flaring up in the hills of this beautiful part of the country began to spread, and with the winds approaching 70 mph, the fires took on a life of their own.

The fire quickly escaped the control of the firefighters and spread so fast that, in the late hours of Sunday and early hours of that Monday, neighborhoods became endangered and thousands barely escaped with their lives to evacuation shelters. Among those to evacuate were two young Red Cross volunteers and their families. Jackson and Patrick are only 17 years old, but in the days that followed the devastation of the worst wildfires in California history, their maturity, positive attitude, and resiliency would shine through as beacons of hope and pride for many within the Red Cross.

Jackson was the first of the two to become a Red Cross volunteer over a year ago when he was looking for a volunteer opportunity for his school’s volunteer program and Senior Project. He first started by helping do general office work. He brought Patrick in as his partner for their Senior Project, and the two have since become Pillowcase Project Educators (teaching third through fifth graders about preparedness and safety), and Jackson has recently joined the Disaster Action Team. Because of their dedication, accountability, and maturity, they have also just joined their local Red Cross Board of Directors as Youth Board Members and have started a Red Cross club at their school.

One of the responsibilities of being on the Disaster Action Team is being on call and able to respond to house fires or emergencies. While there had been a couple fires since he had joined the team, Jackson had never been called out because he was not on call at those times. That changed when he received a text around midnight that there were fires and people were being evacuated, to meet at the office in Santa Rosa, and that Red Cross was opening shelters. His immediate response was to gather his supplies and head out the door, much to his Mother’s dismay and worry. But because his parents supported his volunteer efforts, they let him go, not realizing that his drive to the office would take him right in the path of the fires.

Prior to the text, Jackson was already preparing. As he drove home from work earlier in the evening, he fought the winds. He returned home, worked on homework, and then tried to go to bed, but he couldn’t sleep because there was a glow in the room. He got up, looked out the window and could see the flames just flickering above the mountain on the other side of the valley. Seeing that, he awakened his parents and told them to be prepared.

When he received the text his thought was that he would be setting up a shelter for other people, on the other side of the valley. But as he drove, he saw police officers knocking on doors, firefighters going through the neighborhood. Still, it hadn’t yet registered that the fire was endangering his family or house. As he neared the office, the power was out everywhere, and people were standing on the sidewalks and at gas stations looking at the fire as it approached, it was a surreal moment, like in a movie. Along the way, he tried to call Patrick to wake him up and warn him. He texted his parents around 1m. to give them a heads-up that they may need to evacuate.

As for Patrick, he remained asleep when his mom woke him up to tell him that there was a fire not far from their home, in the Mark West neighborhood, which also happens to be where their school is. She happened to wake up because a fire-caused power outage caused her fan to turn off, and the resulting silence awakened her. Shortly after, Jackson’s mom texted her to tell her there was a fire. Still sleepy and a bit disoriented, Patrick threw whatever he could think of in a duffle bag. When he walked outside, he could see the whole mountain on the other side of the valley aflame, and he just knew that his house would not survive this fire.

Both Jackson and Patrick’s homes, and most of their friends’ homes, were lost in the fire that night, along with their school. But instead of focusing on what they lost, Jackson and Patrick worked every day in the first two weeks after the fires, helping in shelters, helping in warehouses, and helping wherever they were needed. For them it was the best way to take their mind off what had happened, to make connections with others, and to focus on making a difference. They needed to create a routine for themselves.

School has started again, but at four different satellite locations, with each grade at a separate location. It is not the same, yet they are hopeful to be back in one location by second semester. Both families have found places to live, and are preparing for the next phase of their recovery. As for Jackson and Patrick, they remain positive and hopeful for the future, and they have begun the application process for college. They plan to continue as Red Cross volunteers, especially because they now have a personal experience to share that they feel will have even more impact on the children they teach in the Pillowcase Project.

When asked what they learned or what is the one thing they want people who confront disasters to take away, they both said to stay hopeful, do not give up hope, stay positive. These amazing young men are true assets to the Red Cross, to their community, and nothing but success awaits them in the future.