Red Cross volunteer: “This is what we do; we go where we’re needed.”

It was Dec. 11, and Jodi Wallace, a 16-year veteran Red Cross volunteer from California’s Silicon Valley chapter, was already tired when she got the call to go to Kentucky after a series of tornadoes had devastated broad swaths of that state.

Wallace, 60, had spent most of August responding to California’s Gold County fires and then moved on to assist with the hurricane response in Louisiana. After that, she had helped with the flood response in Washington state. She had been home for only a little more than a week, ready for a well-deserved break, when the call came in.

She knew the scale of the disaster meant the Red Cross would be needed more than ever, so she asked her husband what he thought. “He always tells me, ‘this is what you trained for,'” Wallace says. He’s even teased her: “Would you like me to pick a better month and schedule a disaster for you?”

END_OF_DOCUMENT_TOKEN_TO_BE_REPLACED

Volunteer lifts morale of all around her

Deborah Torres knew she wanted to volunteer for the Red Cross even before she retired from San Mateo County, where she ended a long career in social services and public mental health in 2013. Not long before her retirement, Torres found herself partnering with the Red Cross after two large fires destroyed two apartment buildings in Redwood City. The Red Cross had opened a shelter at the armory near Red Morton Park for people displaced by the fires and was helping them figure out their paths to recovery. “I got to see [the Red Cross] in action,” Torres said.

“I told myself when I started working with Red Cross, that when I retire that’s what I’m going to do,” she said.

And this year, Torres was named the Red Cross Volunteer of the Year for San Mateo County.

“I was totally surprised [to receive the award],” Torres said. However, her fellow volunteers were not surprised. Torres’s background in social services and mental health and as a bilingual Latina with decades of experience working in the county make her invaluable.

END_OF_DOCUMENT_TOKEN_TO_BE_REPLACED

Tirtza, Barry and Gumby help out in Gold Country shelter

Photos and reporting by Barbara Wood

Tirtza Pearl of San Francisco figures she has deployed nearly 60 times since she joined the Red Cross in 1991 after the devastating firestorm swept through the hills of neighboring Oakland. Only recently, however, has she convinced her husband, Barry, to join her. Both Pearls worked in a Red Cross shelter in the Cameron Park Community Center in El Dorado County after the Caldor Fire in September. It was Barry’s second deployment.

“The people who volunteer for the Red Cross are an amazing group of people, ” Barry said. “They devote heart and soul to the clients.”

Barry says, so far, he’s only deployed with Tirtza. “I feel much more confident of all her years of experience,” he said.  “I’m still learning the ropes.”

In addition to recruiting her husband, Tirtza has brought another special guest along on at least ten deployments – Gumby. The stretchy green figure represents the unofficial motto of the Red Cross “Semper Gumby” or “Forever Flexible.”

END_OF_DOCUMENT_TOKEN_TO_BE_REPLACED

Ready for the Next Wildfire: After Multiple Evacuations, Sonoma County Resident Has a Plan

After twice evacuating her home for days during major wildfires, and living through several more evacuation warnings, you’d better believe Kathryn Hecht has a plan for the upcoming fire season.

The Sonoma County resident is a Red Cross regional communications manager whose job includes informing the public about the best ways to prepare for disasters.

She practices what she preaches.

Near her front door Hecht has stashed pet carriers and a go bag that includes clothing, important papers, emergency supplies, dog and cat food and toiletries. She has planned two driving routes out of her neighborhood, and a foot route in case those two are blocked. She subscribes to her county’s emergency notification system, Nixle, has the Red Cross emergency app on her phone, and follows local sources of emergency information on Twitter. She and her husband have agreed on two emergency meeting points in case one is unavailable.

END_OF_DOCUMENT_TOKEN_TO_BE_REPLACED

Berlin Gomez-Muniz stood quietly as a 3-inch diameter “Hero” medal was draped around her neck at the Jan. 16 Silicon Valley Chapter of the American Red Cross board meeting, but when it was the most important, the 11-year-old says, she yelled so loud her throat hurt after she alerted her extended family to a fire just before Christmas. END_OF_DOCUMENT_TOKEN_TO_BE_REPLACED 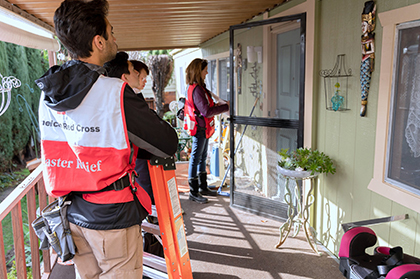 These volunteers were among those installing smoke alarms and carbon monoxide detectors in the Sunshadow mobile home park on Feb. 19, 2019, six months before two residents’ lives were saved when the smoke alarms alerted them to a fire. Photo Credit: American Red Cross/Oleksii Nazaruk.
Click here for more photos from the event.

San Jose resident Nguyen Robson had been an American Red Cross volunteer for less than a year when he was called to help two mobile home residents displaced by a fire and received a vivid lesson about his volunteer work’s impact.

When Robson arrived at the Sunshadow mobile home park in San Jose, the two residents — waiting safely outside their home — greeted him with grateful recognition in their native Vietnamese. They remembered Robson as one of the volunteers who had installed smoke alarms and helped them prepare an evacuation plan for their mobile home only six months earlier. The alarm woke them from a mid-afternoon nap and allowed their escape.